Skip to content
2003
History Policies
A Roadmap for Change

Governor Brennan appointed a “Task Force on Long Term Care for Adults” to study the systems of long term care as they stood and bring back policy recommendations to the administration. 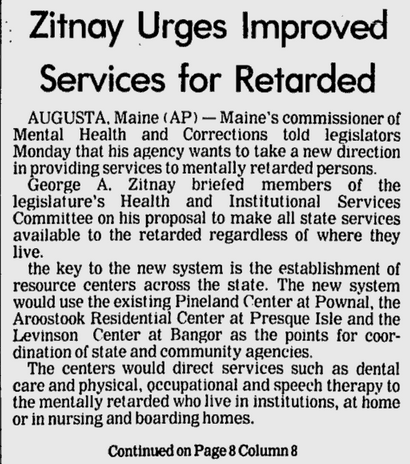 The years while the lawsuit worked its way through the courts were marked by much upheaval and many changes at Pineland. Many policies were beginning to be implemented in order to give Pineland residents more autonomy, choice, and opportunities.

The Maine Legislature, as such bodies are wont to do when faced with intractable systemic problems, on the recommendation of the Legislative Research Committee in 1955 created a Governor’s advisory committee to study the issue - the Maine Committee on Problems of the Mentally Retarded.

The recommendation of the Committee was unequivocal: “After full investigation of this subject, we most earnestly recommend to the legislature of Maine, that humanity demands at our hands the location of such a home for this unfortunate class: that economy and the protection of society demand it.”