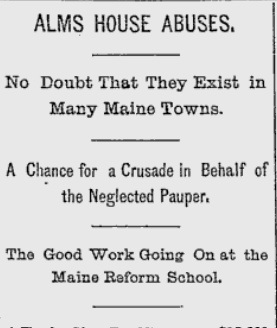 In 1859 a report to the Legislature on the issue of “idiotic children” and the need for their education led to a resolve funding such “education” at one of the Institutions already in place in New England, as well as a call for Maine to investigate the building of its own institution.

There was also concern that the “town farm” system was becoming too expensive, too accommodating of “laziness”, and also, ironically, rife with abuse and corruption. “The fact is that a namby-pamby policy in the poor house will invite those who might not be paupers. There is a distinction to be made between those who are paupers through feebleness of mind or of body or through misfortune, and those who are paupers largely because of being born into cussedness as well as into weariness.”

By 1875, after the regulation of poorhouses in most states became the responsibility of the State Board of Charities, laws were passed prohibiting children from residing in poorhouses and removing mentally ill patients and others with special needs.

By the late 19th and early 20th century, there were rising calls for a separate institution for those who were called the “feeble minded”. Towns were interested in reducing their welfare costs, and welcomed a place to send people who were seen as an undesirable burden in their communities, and policymakers thought that large institutions would create cost savings through efficiency.